Robert W. Moore started drawing at the age of four.

His talent was recognized early and the public schools sent him to art school in the afternoons and evenings.  It was the 1930s and the 1940s and he began at the Society of Arts and Crafts in Detroit─now the College for Creative Studies─and the Cranbrook Academy of Art where he painted for the Hungarian refugee, artist Zoltan Sepeshy.  He also attended the Norton Art School in West Palm Beach, Florida─in 1947.  At Norton, an instructor named James Mallory Wilson III, offered to house and teach him. Prominent financier E.F. Hutton was also in the class and advised him that artists like Wilson were more often than not, destined for poverty.  Reluctant to take a chance on being another starving artist, he stopped painting at 16.  He picked it up after retirement, 52 years later. 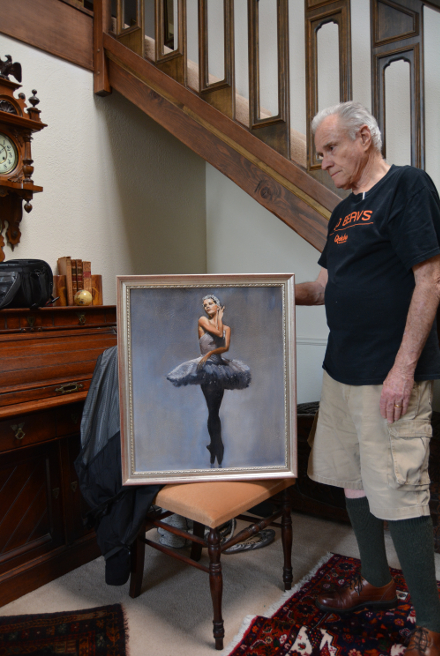 Robert worked his way through college, eventually graduating Phi Beta Kappa in Economics from UCLA.  After a stint at the Los Angeles Times he returned to UCLA for an MBA in Finance.  He was a personnel director for a Fortune 500 company, an Industrial Engineer with the Space Program, a CPA and a corporate Controller.  He earned his Ph.D under his hero, Peter F. Drucker and was a Professor of International Management at University of Nevada Las Vegas for 30 years.

In 2006, they moved to Corvallis, OR, in the midst of an agricultural and University area.

Bob enjoys painting in the winter but when the weather changes, his garden becomes his canvas.  Next time you are in Corvallis, please come by for a visit.  He would love to show you around his beautiful home and garden.  Contact Bob by clicking here.

Art For Sale! All pieces of art on this site are originals and come framed. Prices listed do not include shipping. Happy shopping!

Bridesmaid 15x19 Oil on Board

The Supplicant 14x17 Oil on Board

Stone Bridge With Moss Oil on Board 21x17